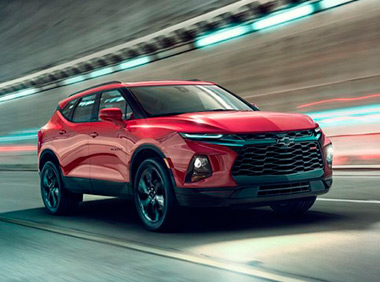 The entry-level 2019 Chevrolet Blazer L will start at $29,995 including destination charges. In addition to the base L, the vehicle will be available in Blazer, Blazer RS, and Blazer Premier trims—curiously, the Blazer L resides under the simply named Blazer in the product hierarchy.

Unfortunately, Chevrolet didn’t divulge the starting prices of the other Blazer trim levels, nor did it reveal the cost of adding an optional twin-clutch all-wheel-drive system. But the base Blazer L will come standard with Apple CarPlay and Android Auto, keyless entry and start, a high-definition rearview camera, dual-zone climate control with rear HVAC vents, a sliding rear seat, and more. That list of standard features is impressive for a base model, though admittedly many of the Blazer’s competitors offer similar kit.

As with many vehicles in this style-conscious segment, the Blazer will likely sell not based on its value proposition but on its styling. Folks in the market for these biggish two-row crossovers place a higher priority on expressive design than off-road capability or sheer versatility. In that respect, the Blazer might be a perfect example of the breed, with bold styling front, side, and rear that looks modern and crisp to most of us (though some editors accuse it of being overwrought). The interior is also very contemporary, with styling that mimics the sporty Camaro.

But even given the segment’s form-over-function hierarchy, Chevrolet still brags about the Blazer’s standard Traction Mode Select, which optimizes throttle and stability control settings for a variety of road surfaces. Blazer owners will have to prioritize cargo capacity a bit less than the aforementioned four competitors: Its maximum cargo volume of 64.2 cubic feet is between 3 and 9 cubes less than its competition.

That still might be enough space for most of the Blazer’s intended customers, who will likely be small families, empty-nesters, and working professionals who don’t need a lot of room. And if the price delta isn’t steep, we think a well-equipped, aggressively styled Blazer RS might be the perfect machine for folks like that.